The Ranging Bloyster (ケメクジ) is a boss in Pikmin 2 that resembles a large Toady Bloyster, and is possibly named for its longer mouthparts or increased travel range. These creatures have an affinity for shiny objects and will track your active pilot's light beacon, but can be used to your advantage (see alternate strategy). Ranging Bloysters also slowly regenerate health, so taking them out quickly is recommended.

There is a glitch that makes the Raging Bloyster still "live" after you kill it. If you kill a Ranging Bloyster while its gill is still glowing, and if the player is lucky, the gill left behind by the Bloyster will still glow and beep, however, it will only glow if the player takes it in the ship. When it is put in, there will be a strange light that appears on the ship.

"This species of mollusk has shed its shell through the process of evolution. What appears as a flower-shaped protrusion on its back actually functions as its gills. The ranging bloyster ensnares small animals with its sticky tentacles, reels them in, and consumes them. Observers have noted that this creature exhibits a keen interest in flashing objects. It often tries to capture and ingest these objects. Researchers and explorers equipped with flashing identification beacons should be wary when in close proximity to this dangerous predator."

"The gills are best prepared deep-fried in an herb and bread-crumb batter. Also tasty poached and drenched with fine soy sauce."

"Several tongue like feelers on the Ranging Bloyster extend from the creature's mouth and seek out Pikmin that match the color of the bulb on its behind. Split your forces into two armies on opposite sides of the arena, and take turns switching to team that has a good shot at the bulb."

This beast can be difficult to defeat in a timely manner, but with the right strategy, can be overcome without losing any Pikmin. The Bloyster will hunt the active Captain and will change its target accordingly if the player switches. However, there is a slight delay between the time it stops chasing one captain and starts on the other. Use this as an advantage by placing each captain on either side of the beast. Lure it towards one, then switch with (Y) (or (-) in the New Play Control! version) and quickly toss Pikmin onto its vulnerable gill. Call them back when the Bloyster turns to face the player, then repeat. Another way to deal with this boss is to attack it with a single group of Pikmin led by both captains. Because it pauses slightly in order to track the leading captain, the idea is to keep switching control of the captains every time it turns to active captain's color. In this way, it is very easy to simply walk past it, step behind it and throw Pikmin at its gill without trouble. Be sure to call back any Pikmin that get shaken off their target.

It is possible that when tapping Y or - as fast as you can, the bloyster will become confused. After confused, it is recommended that you petrify it then use an Ultra-Spicy Spray. The boss should go down no problem.

If the Bloyster's gill is proving too difficult to reach, Purple Pikmin can simply be thrown onto its back which will deal damage upon impact and have a chance of stunning the creature, preventing it from fighting back. A large group of Purples is recommended, for if the Bloyster is not constantly kept subdued, it can quickly turn and gobble up the player's Pikmin.

A much more time consuming method is to have a 100 strong army, confront the Ranging Bloyster, spray it and then toss Pikmin onto its back. When it unfreezes, simply spray it again, and any Pikmin that were thrown off will leap back on it to continue the assault. Note that this can take multiple ultra bitter sprays and the Pikmin will likely revert to leaf Pikmin when thrown off, but is a far safer method.

As a last resort, White Pikmin can be fed to the Bloyster, each dealing heavy damage when eaten. To ensure minimal Pikmin loss, Ultra-Spicy Spray at least 4 White Pikmin.

An alternative strategy is to break one of the gates leading to the Bloyster. If there is only one gate, a reset is a great idea. Then, with the one gate gone, have one of the captains grab some Pikmin, and the other stand in front of the other gate. The Ranging Bloyster should be attracted to this captains light. Now, switch to the other captain and run through the "hallway." The monster should now be attracted to you. Switch back to the other captain and it will pause and then try and run through the wall to you. The pause in between Captains will give you enough time to reach its weak spot. It will then turn around to you. Switch to the other captain and it shall attempt to get that captain. Repeat this process for an easy win. 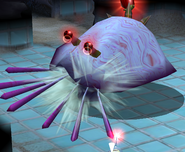 The Ranging Boyster attacking with its 7 tongues.

2 Ranging Bloysters attacking Louie.
Add a photo to this gallery

Retrieved from "https://pikmin.fandom.com/wiki/Ranging_Bloyster?oldid=128341"
Community content is available under CC-BY-SA unless otherwise noted.