Red Pikmin are the first variety of Pikmin identified in the Pikmin games. Aside from their color, the distinguishing feature of Red Pikmin is their pointed noses. These Pikmin possess an immunity to fire, making them useful for fighting Fiery Bulblax and Fiery Blowhog and passing by or, in Pikmin 2, destroying fire geysers. In Super Smash Bros. Brawl, Red Pikmin can also use fire to attack their opponents. They spend nights in the Red Onion. Of the three Pikmin types in Pikmin, they have the most attack strength because of their thorn-like pointed noses. They are only bested by Purple Pikmin by their strong attack power in Pikmin 2, though their high strength is removed in 2-Player mode to make them equal to Player 2's Blue Pikmin. As is shown in Pikmin 3, Red Pikmin can break down dirt walls faster than other Pikmin thanks to their higher attack power. A Red Pikmin is naturally stronger than a Rock Pikmin, but if a Rock Pikmin is thrown at a target, it deals more damage.

In all games, they are found on Day 1, which has no time limit in any of the three Pikmin games. In Pikmin, the Red Onion is located where Olimar lands, and ejects the first seed; in the second game, 5 Red Pikmin are found, fighting a Dwarf Red Bulborb immediately by Olimar in the Valley of Repose, while the Red Onion is closer to Louie's landing spot. In Pikmin 3, 3 Red Pikmin are found by Alph, trying to free the Red Onion from a tree branch. In order to increase the number of them, a Captain can order corpses or Pellets to be carried to the Red Onion, or other colors of Pikmin can be thrown into a Crimson Candypop Bud.

Red Pikmin appear in Super Smash Bros. Brawl as a trophy and a type of Pikmin Olimar can pull from the ground via Pikmin Pluck. Red Pikmin, like in the games, deal a high amount of damage (in Brawl, Purple Pikmin have higher knockback, but, with certain attacks, do less damage to foes than Red Pikmin). Also, Red Pikmin have fiery properties to deal more damage and are immune to fire attacks such as Bowser's, Charizard's Fire Breath or Mario's Fireballs.

"These fire-proof fighters can take down a foe in nothing flat!

All the Pikmin will probably work hard for you, but will they work through fire for you? Probably. But you should use the red guys for that job-so that no one gets hurt." These guys are fire Pikmin.

"A type of Pikmin--which are odd beings who grow like plants yet are as mobile as animals. Red ones are heat and fire resistant and are strong attackers, which makes them valuable when facing dangerous foes. Purple Pikmin are also tough fighters, but since it's difficult to increase their numbers, Red Pikmin are easier to manage. Red Pikmin have distinct pointed noses."

In Super Smash Bros. Ultimate Red Pikmin are featured as a Spirit. It's rating is advanced and it's effects Lava-Floor Resist. It's effect comes from the fact that in Pikmin games Red Pikmin are resistant to fire.

Official Art of a Red Pikmin from the first Pikmin game.

Red Pikmin are immune to fire, as seen here. 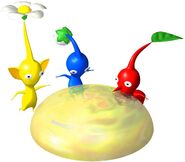 The Red Onion, where Red Pikmin seeds are produced.

The Red Pikmin as it appears in SSBB. 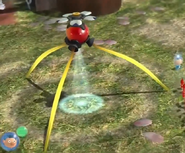 The new Onion from Pikmin 3 that the Red Pikmin reside in (only red at this point).

Finding a Red Pikmin for the first time.

A Red Pikmin seen in the Greninja and Charizard reveal video for Super Smash Bros. for Wii U/3DS 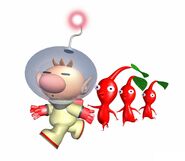 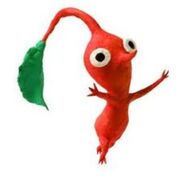 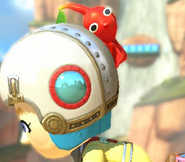 A Red Pikmin in SSBU
Deutsch
Community content is available under CC-BY-SA unless otherwise noted.
Advertisement