The S.S. Dolphin I is the delivery ship that belongs to Captain Olimar in Pikmin.

The S.S. Dolphin is a cream-colored ship with orange highlights. It has four Omega Stabilizers on the bottom, a hinged door on the front with the Geiger Counter upon it, the cockpit above this door, and the Bowsprit above the cockpit, which is protected by the Radiation Canopy. The Number 1 and Number 2 Ionium Jets are visible on the lower sides of the rocket while two lights displaying the Dolphin's status are on the upper sides, with the Sagittarius and Libra near them. Metal braces secure the Dolphin's sides together. The door swings open downward to extend a tractor beam that will draw Olimar and other items into the ship. While the ship has between 12 and 30 parts, the ship gains an eggbeater-like protrusion on one side of the bowsprit.

While not shown onscreen, Olimar states after collecting the Analog Computer that the Dolphin does possess artificial intelligence.

The S.S. Dolphin crash lands onto the Pikmin Planet at the start of the first Pikmin game; while Olimar is en route to a vacation spot, an asteroid strikes the ship, sending it plummeting downwards. During the crash landing, thirty of its pieces fall away and into the five areas of the planet. The first game revolves around the collection of these parts using the Pikmin.

When Olimar returns to Hocotate with a fixed ship at the start of Pikmin 2, the S.S. Dolphin is sold to help pay the Hocotate Freight company's enormous debt. It's replaced by the Hocotate Ship.

Olimar mentions in one of the Data Files found in Pikmin 3 that he had plans to buy back the Dolphin once he had found enough treasure on the planet, grown very tired of the Hocotate Ship's sassiness.

The S.S. Dolphin collides with the asteroid.

The Dolphin blasting off early in the game

The completed Dolphin. The Secret Safe, however, is still unaccounted for.

The Dolphin after it crashes in The Impact Site

The Dolphin being salvaged for Pokos 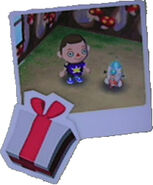