Shearwigs (トビンコ) are enemies found in all three Pikmin games. The females of this species aren't seen, as according to Olimar's notes, they spend their entire life underground, somewhat similar to cicadas. They also do not possess the male's wings. The males have a dark green shell, sporting simple bug-like wings and large, sickle-shaped mandibles. They are more aggressive than Male Sheargrubs, and take leave of the ground to hover up high after having lost at least half of their health to allow it to steadily return. While up in the air, these creatures are still within the reach of a Pikmin throw, of which just one accurate button-press is enough to kill them.

Like other Mandiblards, Shearwigs have an affinity for chewing apart stick bridges, and they lose health while in water. The beasts fly up out of the water after losing half of their health, so this cannot kill them unless they bite onto a Pikmin while in the water. If they are hit directly with a Pikmin, they will die instantly, just like a Dwarf Bulborb. Another method is to throw Purple Pikmin onto a Shearwig; this tactic is rather effective, and will stun other Shearwigs in the area.

In Pikmin 2, these enemies deal the most amount of damage to a captain, with the damage about 1/3 of the health without the Justice Alloy, and about 1/4 with the Justice Alloy. Shearwigs also have much more health than its relatives in Pikmin 2.

In Pikmin 2's 2-Player Mode, Shearwigs may sometimes pop out when the player digs up a yellow marble.

In Pikmin 3, Shearwigs are illusions created by the Plasm Wraith, so there is no real Shearwig in the game. They also gain the ability to swoop down and grab Pikmin while in flight, making them somewhat more dangerous. Also, they will now fly almost all the time while fighting, not just to regain health, as they do in the previous games. This makes them easy to strike down and deal good damage to, and makes them easy targets for Winged Pikmin.

Shearwigs make an appearance in Hey! Pikmin, but only during the battle against the Queen Shearwig. They surround their queen in the air and swoop down to attack Olimar and his Pikmin. They do not get their own entry in the Creature Log.

"The males of this species are able to fly, but the females remain underground."

"Unusual for their genus, flying mandiblards have retained their wings. However, only the adult males of this species can fly. Females of this species spend most of their life span underground. They do emerge for a period after maturation to spawn, but never metamorphose."

"Grate this beast into a zest and whisk with sugar, cream, and chopped dark chocolate for a lusciously indulgent mousse that's a true culinary coup de grace!"

"Shearwigs are essentially Male Sheargrubs with wings. You can pluck a Shearwig from the air with a toss of a single Pikmin, then defeat it quickly with a small swarm. Although it takes some effort to aim and fire at the little bugs, they provide a good source of Pikmin sprouts."

"These creatures behave much like Male Sheargrubs, burrowing underground and waiting to attack unsuspecting prey. Once above ground, however, Shearwigs fly into the air and attack your Pikmin from above. When you encounter a group of Shearwigs, move out of range and attack the enemies from a distance. During prolonged battles, Shearwigs will shake their attackers by burrowing underground. Don’t let your guard down until you’re sure the area is clear of enemies."

In Pikmin, there is a visual glitch that can happen when the Shearwigs in The Distant Spring by the Massage Machine are hiding underground. If they are hiding right on the ledge that goes into the water, they can be seen above ground, completely motionless.

In the same game, Pikmin that are thrown or ordered into an area where Shearwigs are under the ground attack the ground as if something were there (similarly to the way White Pikmin unearth buried treasure). However, the Shearwigs will not come to the surface unless Captain Olimar moves near enough. This is useful for when Pikmin need to carry objects through an area with Shearwigs or Sheargrubs (such as the Guard Satellite or the Extraordinary Bolt), as the enemies won't attack the Pikmin. This can also be used to indicate whether any Mandiblards lie ahead.

Sometimes in Pikmin 2 two-player battles, a glitch will occur and the Shearwigs will move at a greatly accelerated speed. This makes them very dangerous, as a small group of them can then kill a lone leader in just a few seconds. When this glitch happens, the best idea is to either swarm the speedy Shearwigs with a large group of pikmin, or use an Ultra-Bitter spray. Beware that the amount of time they remain in the air decreases as well!

The best way to kill a Shearwig is to land a Pikmin directly on top of one; this will instantly kill it. Another way is to swarm it with a large group of Pikmin, but this can be risky, as the Shearwig can grab and eat Pikmin quickly. If the creature takes flight, just knock it down by throwing any kind of Pikmin at it, and it will take great damage. This must be done quicky, however, because if a Shearwig is given too much time in the air, it will restore a great amount of its health. Another method of killing them is to simply have Olimar punch it quickly and repeatedly while dodging attacks. If done right, the Shearwig will attempt to bite Olimar, (and miss), not having enough time to lift off, and will die.

Shearwigs are rather unchanged and can be taken out using the same strategy that is effective in Pikmin. Purple Pikmin are recommended because they have a homing attack. They may also now be used to stun large groups of the enemies, which is quite helpful considering that a Shearwig is seldom found alone.

Shearwigs now take flight the moment they emerge from the ground, making them easy targets for Winged Pikmin. All the other kinds of Pikmin work well, too; if a Shearwig is hit, it will fall to the ground and become very vulnerable while struggling to get back up. At this point, it will have only about a third of its health left, so getting a few Pikmin to attack it will ensure its defeat. If one wishes to defeat a group of Shearwigs as quick as possible, Rock Pikmin are the best, as they will kill the airborne Shearwigs on impact.

Shearwigs appear exclusively in Sector 5-E; Troop Commander, where they protect their queen during the battle. They attack by spinning around like a drill and rushing into Olimar and his Pikmin. They die in one hit, but once they start spinning, any Pikmin thrown at them will die. 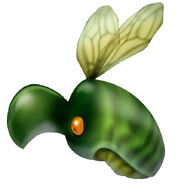 Official concept art of a Shearwig from Pikmin.

The Shearwig as seen in the Creature Montage of Pikmin. 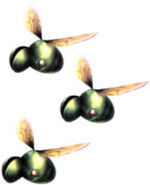 Artwork of three Shearwigs from Pikmin 2. 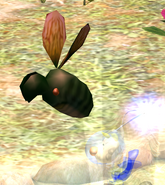 Shearwig spinning around Olimar and the Pikmin.
Add a photo to this gallery

Retrieved from "https://pikmin.fandom.com/wiki/Shearwig?oldid=132081"
Community content is available under CC-BY-SA unless otherwise noted.