The Skutterchuck is a small bipedal insectoid creature featured in Pikmin 3. They have a habit of picking up objects similar to Dweevils. However, this creature particularly picks up round crystalline stones to defend itself. If the player uses a Rock Pikmin to break the stone, it will quickly scurry away.

The Skutterchuck has many insectoid features, such as 5-jointed hindlegs and a pair of antennea. It also has 2 yellow cephlapodean eyes. Its head appears to be concave, allowing it to hold the pebbles. If Pikmin continue to attack it after there are no more pebbles for it to pick up, it will thrust itself upward to launch the attacking Pikmin high into the air. When it dies, it flips over and curls its legs in the same generic fashion most insects die.

They are relatively uncommon creatures (in the story), only appearing in two areas. One of these, a piece of land next to a bridge located in the Garden of Hope , gives one and only one appearance for them, as they do not respawn once defeated here.

"Its main offensive maneuver is to throw the crystal on its back. Without that crystal, it is defenseless. I've hypothesized that the males carry rocks and the females carry crystals...but I don't have any evidence to back that theory up."

Most types of Pikmin are ineffective for fighting the Skutterchuck; if they are thrown on one's back, it will scurry away madly, preventing any more from be thrown on, or pick up a Crystal Ball to defend itself. Because of this, Rock Pikmin are the best to use for fighting the creatures. One rock will break the crystal upon the creature's back, and then one hit on the body will defeat it. Rock Pikmin are also immune to being crushed, thus they evade the Skutterchuck's only attack, flinging the crystal off of its back, with the aim of crushing the player's Pikmin. This attack, however, can travel a good distance, so it is best to take caution if the player is passing by a group of the creatures, especially if leafed Pikmin are included in their army.

When they are in a group, it's possible to take advantage of the Skutterchuck's attack.  If a captain is positioned near another enemy, the Skutterchuck will throw its crystal at the player, and the ball will easily crush the other creature.

Skutterchucks can easily be defeated by using a Rock Pikmin to shatter the crystal it is carrying, then throwing any Pikmin at it to finish it off. Like many enemies in this game, they die in one hit. It will get another crystal if it isn't defeated quick enough. 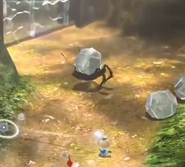 A Skutterchuck in the Tropical Forest, a level in Mission Mode.

A Scutterchuck from the side

A Skutterchuck without a Crystal Nodule on its back.

A Skutterchuck being scanned in the beta version of the game.

A Skutterchuck as it appears in the Creature Log.

A Skutterchuck in Hey! Pikmin without a crystal on its back.

Skutterchuck as seen in the Credits of Hey! Pikmin.