Pikmin
Register
Don't have an account?
Sign In
Advertisement
in: Creatures with no known family, Pikmin 1 enemies, Enemies,
and 6 more

The Smoky Progg (ドドロ "Dodoro") is an optional boss found only in the first Pikmin game, and is one of the most difficult enemies in the game. The only way to encounter it is to visit The Distant Spring before or on Day 15. It resides in the large watery area located to the east of the landing site, in the center of a small group of islands. The Smoky Progg is in an egg and if it is approached, it will break out within four to eight seconds. When the egg breaks open, Smoky Progg will immediately go to the landing site, ignoring Olimar and possibly walking through your whole Pikmin Squad if not careful. Swarming the unopened egg with a large number of Pikmin can easily defeat it. However, it will not leave a golden pearl.

The Smoky Progg itself is a dark green and black creature with white, glowing eyes, with a pink/purple ring around the white, and constantly emits a cloud of gas that is poisonous to both the Pikmin and Olimar, which is usually behind The Smoky Progg. It is also able to uproot Pikmin sprouts. The Smoky Progg will make its way towards the landing site upon emerging, so it is necessary to kill it to avoid interference with the day's plans. It has an incredibly high defense, so it takes a while to defeat. When defeated, however, it drops a golden pearl which, if carried to an Onion, will produce one hundred Pikmin seeds.

Olimar's belief that the creature is a malformed larval Mamuta is most likely based upon the fact that both creatures affect Pikmin on a different end of the same spectrum; the Mamuta plants the Pikmin, while The Smoky Progg uproots and poisons them. This relationship could be derived from that of the real life Paradox Frog (Pseudis paradoxa) and its young; paradox frog tadpoles are about four times larger than their adult selves.

"This hideous beast comes from a strange, hard egg. Its mollusk-like body is wrapped in an unpleasant gas that suffocates any Pikmin that inhales it. Attacking its head is successful, but it's best to eliminate in egg form."

This is information shown in the guidebook

"Some say that this is a larval version of Mamuta that was unable to complete the transformation. But, as with Mamuta, the Piku-Lord is shrouded in mystery."

There are several methods of defeating the Smoky Progg, some riskier than others. Swarming the Smoky Progg is utterly useless and will only result in all of your Pikmin perishing. One method is to withdraw one hundred Red Pikmin, wait until it uses its uprooting ability and becomes still, then use the C-stick and A to throw Pikmin onto its face as fast as possible (precise aiming is required so that the Pikmin do not hit the Onion instead of the Progg). If done correctly, the Smoky Progg will be so distracted shaking off Pikmin that it will not be able to move and will eventually die. Another method is to bring out 10-20 reds at a time and continuously attack until it is dead while avoiding its attacks; naturally this method takes longer, but may be less risky.

An alternate way to hurt it would be to use Yellow Pikmin with Bomb Rocks. To do this, aim well and do not hit the Progg on the rear with the Yellow that is thrown, or the Pikmin will be suffocated by the poison. Occasionally, it will chase you around and not give up until your Pikmin die or you get far enough away, at which point it will ignore you temporarily and you can attack it again. You can also disband a group of fifteen to twenty Yellow Pikmin with bomb-rocks near the shore between the Progg's egg and the Onions, keeping the rest of your Pikmin stashed away to avoid excessive casualties. Attack the Progg's egg with a single Blue Pikmin, then hightail it back to the shore. The Smoky Progg will home in on the Yellow Pikmin and the combined explosions will instantly kill or at least severely damage it. Give the Progg's remains to the Yellow Onion; that way you'll more than make up for the ones lost in the explosion.

another method to killing the Smoky Progg would be to draw out 2-5 Red Pikmin, then, when the Progg idles at any Onion, throw all of the Red Pikmin at the Progg. When it shakes the Pikmin off, throw them back on, and it should die in about a third to a fourth of a day. Note that this strategy is not recommended for speed-runners.

It is possible to take advantage of the fact that the Progg can get stuck behind an Onion's leg in battling it. If you are able to make it follow you after it completes its uprooting move, it can get stuck in this way for several minutes. Simply toss Pikmin on its head as fast as possible, and with luck, it can be killed before it shakes itself free.

There is another glitch that can be used to your advantage. If the bridge that leads to the Massage Machine has not been built yet, lead the Progg behind the unbuilt bridge and then run away. The Progg will be stuck by the bridge, and will endlessly turn around in circles. You can then bring 100 Blue Pikmin out and attack the Smoky Progg.

Another alternative to all of these listed above, would be to get 100 Blue Pikmin and swarm the egg until it reaches no health, causing it to die. Although it yields no rewards, it is a good option if you are not as skilled, as you can keep your Pikmin safe.

The Smoky Progg appears in Super Smash Bros. Ultimate as a spirit, and is the first spirit that controls the puppet version of Mario in the Adventure Mode, World of Light. Equipping it gives the player an Unira at the start of battles.

In a rare case, if you walk up to the egg as Olimar with no Pikmin, circle the egg and press A to try to attack it, the egg won't take any damage, yet if you go back to an onion to get your blue Pikmin and return to the cluster of islands, the egg will be gone. The only way to reset the egg is to reset your game. Going to sunset and continuing to the next day will not bring the egg back.

In another rare case, there is a glitch that when you throw a Pikmin at the egg right when it hatches, the Pikmin will float in mid air while doing its "hitting" sequence, damaging the Progg. After about ten seconds the Pikmin will start vibrating faster and faster and then fall off.

It is seen that on occasion, the game says that Olimar has one or two more Pikmin than he actually has. This glitch can happen if large amounts of Pikmin die.

Rarely, the Smoky Progg may be near a Yellow Wollywog when the Wollywog jumps. The jump will propel the Progg in to the air where it will hover for a short time until it begins to slowly return to ground level.

Sometimes when the Smoky Progg reaches the onions, it can get stuck on one of the three legs, making it easier to kill the strange creature. 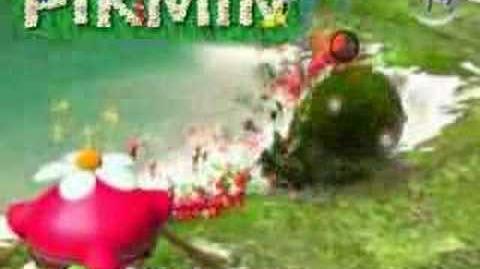