The Swooping Snitchbug (サライムシ Saraimushi) is an enemy found in every Pikmin game so far. They are legless, round, flying insects that have evolved wing-like antennae as a means of moving. In Pikmin and Pikmin 2, they have glass-like eyes with pupils, but in Pikmin 3, they have more realistic compound eyes. They swoop down, as their name suggests, and grab their prey with their claws. After carrying them for a few seconds, they throw them at the ground. This action would harm most prey, whereas Pikmin are simply replanted and reverted to their original leaf state. In Pikmin 3, Swooping Snitchbugs may also grab captains, much like the Bumbling Snitchbug.

These creatures will plummet to the ground if weighed down by a sufficient number of Pikmin, or with a singular Purple Pikmin, rendering it susceptible to further attack. Ultra-bitter Spray may also be used to freeze it in mid-air, causing it to drop to the ground, which is arguably easier, but of course produces no corpse, and may be considered a waste of sprays. A single Rock Pikmin can also weigh it down.

The position of the Swooping Snitchbug in the Enemy reel, which is otherwise alphabetical, indicates that the creature's name may originally have started with "flying". In Pikmin, it only appears in the Forest of Hope on day 15 and forward, and in the Distant Spring on day 4 and forward.

"This rare species uses its antennae as wings."

"The scarpanids originally lived on the ground, sporting poorly developed vestigial wings. This species developed enlarged antennae that can be used as makeshift wings. Scarpanids are attracted by the sight of large groups of Pikmin in cavalry formation and will swoop down to seize them. However, scarpanids do not eat Pikmin, and they will drop any seized Pikmin after a short time. The reason for this behavior is unknown, but I look forward to future research in the area."

"Remove the wings, marinate a well-marbled steak for several hours in a chipotle marinade, then charbroil to perfection."

"A Swooping Snitchbug attacks by snatching its enemies and throwing them to the ground. when a Swooping Snitchbug does this to a Pikmin, the force is enough to bury its victim -- this essentially causes the Pikmin to revert to a sprout.

"Their atrophied wings force them to spend most of their time on land, but they do fly on occasion to steal Pikmin."

"A member of the scarpanid family. Although originally a ground dweller, its oversized antennae developed into wings, allowing it to fly around freely. The snitchbug doesn't eat Pikmin, but rather picks them up, carries them away, and firmly replants them in another location."

"A strange flying insectoid creature from the Pikmin series. Much like a fly rubbing its legs together, the Swooping Snitchbug has a habit of rubbing its hands. When it swoops down and snatches Pikmin from the ground, it doesn't eat them. Instead, it discards them after a few seconds. Why? Who knows?! Who cares?! They're free!"

These creatures can easily be brought to the ground by weighing it down with five or so Pikmin. Yellows are the best option to weigh it down. Afterwards, a simple swarm can defeat it. If the Snitchbug captures a Yellow holding a bomb, it will explode while it is in the air.

The same strategy from Pikmin can apply here. Alternatively, throwing a single Purple Pikmin onto it will weigh it down. Be warned, as on sublevels with abysses, the snitchbug can throw Pikmin down the pit. The snitchbug is much less of a threat in this game. It is advised to not use Purples on metallic sublevels, as there are often bombs on those sublevels.

Swooping Snitchbugs appear near the end of the game, only in Sector 8-D; Olimar's Madcap Ride. They will first appear on the top screen, and, as usual, swoop down from above to steal Pikmin. However, unlike previous games, the Swooping Snitchbug can actually kill Pikmin by carrying them off screen. To defeat them, just throw a Pikmin at it when it comes to the bottom screen and it will die.

There is a rare glitch in Pikmin: Once you've knocked the Swooping Snitchbug down to the ground, throw your Pikmin onto the creature and swarm it with all of the other Pikmin, which should kill it. Then, carry it back to the Onions by swarming the corpse. Later, you will notice the Pikmin you threw on the squirming Swooping Snitchbug are floating in the air, making the attacking motion as if they are attacking something invisible. 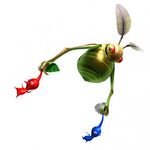 Artwork of a Swooping Snitchbug carrying Pikmin from Pikmin.

A Swooping Snitchbug in the Creature Montage.

A Swooping Snitchbug at the Perplexing Pool in Pikmin 2.

A Swooping Snitchbug in the Perplexing Pool.

A Swooping Snitchbug being attacked by some Winged Pikmin in Pikmin 3.

A very close and detailed view of a dead Swooping Snitchbug.

A Swooping Snitchbug as it appears in the Hey! Pikmin Creature Log.

A Swooping Snitchbug carrying a Pikmin off screen.
Add a photo to this gallery

Retrieved from "https://pikmin.fandom.com/wiki/Swooping_Snitchbug?oldid=126472"
Community content is available under CC-BY-SA unless otherwise noted.