Pikmin
Register
Don't have an account?
Sign In
Advertisement
in: Pages that need images, Characters, Leaders,
and 5 more

"You found your first bit of treasure. Fine work! Our future depends on your efforts, so check you treasure hoard regularly. I'll check in often. Keep up the pace!"
— Quote from one of the President's emails in Pikmin 2

The Company President Captain of Hocotate Freight (ホコタテ運送のキャプテン社長), also known as Shacho, is the owner of Hocotate Freight and tritagonist of Pikmin 2, who was first mentioned in Pikmin. He runs into financial trouble after Louie, a new employee, shipping a supply of very valuable Golden Pikpik Carrots, is reportedly attacked by a ravenous space bunny, who is said to have eaten the entire cargo of carrots. The President takes out a large loan to reimburse the loss of the Golden Pikpik Carrots, and has no way of repaying the enormous debt. He sells off the only company asset, Captain Olimar's ship, the S.S. Dolphin, in Olimar's absence, but it only makes a small dent in the enormous loan, as

This, occurring after the events of Pikmin, surprises Captain Olimar who just returned to Hocotate. He is so surprised by the news, in fact, that he drops a souvenir he brought back from his "vacation" for his son. The souvenir, a bottle cap, is collected by the ship, which then evaluates the item as a treasure and worth

x100, reducing the debt to an even

The President is the main source of mail in Pikmin 2 before the debt has been paid off, his news getting worse as he finds out that the lending agency he inadvertently used was the All-Devouring Black Hole Loan Sharks, as opposed to Happy Hocotate Savings and Loan, and goes into hiding.

The only known family member is his wife, who occasionally emails him in after the debt is repaid in Pikmin 2. She often nags the President, calling herself the real boss of Hocotate Freight and claiming that she does all the work while he slacks off.  Although she comes off as cold, she works hard to keep hocotate freight afloat and reveals that she actually respects the President after all of the treasure is collected.

"The president of Hocotate Freight. After venturing into space in his youth, he made a shipping company. When it almost collapses after Louie's incident, and Olimar comes back from the Pikmin planet, the president discovers the outstanding value of Olimar's souvenir. He then sends his employees back to collect valuable treasures. His treatment of employees is questionable."
— Trophy Description in Super Smash Bros. Brawl

The President as seen in his Smash Bros trophy.

Promotional clay art of the President.

Promotional clay art of the President when yelling. 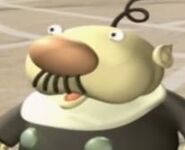 The President with Louie
Community content is available under CC-BY-SA unless otherwise noted.
Advertisement