The Titan Dweevil (ヘラクレスオオヨロヒグモ) is the final boss in Pikmin 2. It is the largest member of the Dweevil family, and arguably one of the largest creatures in the game. But unlike other Dweevils, its only natural attack is to lash out with its pincers, which does no damage and is only an attempt to get Pikmin off it; the creature is only really dangerous because of the weapons it carries.

At the very bottom of the last cave in the game, the Dream Den, Olimar and The President find Louie sitting atop a mound of treasure. When they approach the mound, however, it reveals itself as the head of the Titan Dweevil. The enormous monster then proceeds to attack you, triggering the boss fight. Louie is found on top of it the first time you battle it; the Sales Pitch on him as a treasure suggests that he may somehow be in control of the Dweevil (although if you go back in the dungeon and fight the boss after rescuing Louie, it will still attack you if you didn't take the weapons last time, though this could've simply been an oversight by the developers).

"The largest member of the dweevil family, this fearsome predator carries protective components that frequently exhibit offensive capabilities, an evolution that may be attributed to mere chance. Another evolutionary theory is that the chemical contents of the containers carried by titan dweevils contribute to possible gene splicing. While other dweevils do not seem to choose the objects they carry, the titan dweevil appears to prefer shiny objects above all others."

"Eaten raw, this predator's luxurious legs are bold and full flavored. What a satisfying crunch!"

"The leader of the Dream Den, and Louie's captor is equipped with an arsenal that produces hazards of all varieties. Since the creature is very tall, you'll have to start by targeting its weapon with high-flying yellow pikmin. Be ready to rescue them when they're in need, and have your pilot sidestep the hazard."

It is interesting to note that each of these weapons causes different versions of the music to play when it is used by the Titan Dweevil. It can cause massive damage if it uses the Comedy Bomb or Shock Therapist if you get hit or just send in Whites, Yellows, etc. Each weapon's effect (except for the Shock Therapist, which uses electricity to attack) can be dispelled by Olimar/President's Whistle. The Titan Dweevil will attempt to attack if you try to carry the treasures away before it's defeated. If you knocked all the weapons off but haven't defeated it, it will flail its arms, knocking off Pikmin, potentially removing their flowers.

The Flare Cannon is the easiest weapon to avoid. Out of all four of the Titan Dweevil's weapons, the Flare Cannon takes the most amount of hits to detach. It simply sprays flames in a set radius, as it rotates back and forth in about a 180-degree motion, but takes the most amount of hits to come off. When this weapon is damaged, it will spray further than before, and in a 210-degree motion. This fire is irksome in the fact that it is capable of knocking down the captains even if the player has the Scorch Guard, stopping the player from saving Pikmin. The Red Pikmin are immune to this weapon. Along with every other item (except for Louie) this is worth 1000 pokos.

The Shock Therapist is the only weapon that kills on contact with the attack, but it takes the least amount of hits to come off. When this weapon is used, it will spit out eight electrical "nodes" that will activate and form multiple arcs of electricity between them that electrocute all but Yellow Pikmin that touch them. This attack won't damage the player if they have the Dream Material, although it will still knock you down. Keep your Pikmin in a tight group to avoid getting electrified. When this weapon is damaged, the nodes will activate the moment they are released and may move while activated. This weapon may actually reach a bit beyond the Titan Dweevil's arena on rare occasions, so it is advised to keep your Pikmin behind the exit geyser because the nodes will bounce off the geyser even if they get in the "tube". The Yellow Pikmin are immune to this weapon. As a warning, do not use Pikmin besides Yellows as that is too dangerous sometimes.

The Monster Pump is the toughest weapon to avoid. This weapon takes the second least amount of hits to come off. When this weapon is used, it spits out blasts of water that will get latched onto the Pikmin's heads and suffocate them, but if they are whistled, the effect will wear off. When the weapon is damaged, it will spit out water at a faster speed. This weapon's range extends beyond the circular arena where the Titan Dweevil is fought, so be sure to protect the Pikmin that are not fighting. Because of this, the player should get rid of this one first. The Blue Pikmin are immune to this weapon, but using Yellow Pikmin is advised to avoid having Pikmin electrified by another more deadly weapon, the Shock Therapist. When the Titan Dweevil uses this weapon, it is advised to keep running.

The Comedy Bomb is the second easiest weapon to avoid. This weapon takes the second most amount of hits to come off.

When this weapon is used, it will spray three streams of poisonous gas. The streams move at a constant speed and direction, so standing in between them at all times should be no problem. Strangely, the captains will get knocked down by hitting one of these poisonous streams, so it is advised to dodge the streams. When it is damaged, it will spray four streams that may change direction spontaneously and randomly. The easiest way to dodge it in this form is to simply get onto a slope. The White Pikmin are immune to this weapon. Once collected, the ship fills it with laughing gas, hence the name.

*Unlike other dweevils, the Titan Dweevil can't reattach weapons once it loses them.

1. Move all non-yellows behind the geyser; this reduces their chances of being harmed by the devastating Monster Pump (Yellow Pikmin's flight and electric resistance makes them ideal for fighting the Titan Dweevil).

2. Take the Yellow Pikmin and strip the dweevil of the most annoying weapon, the long-ranged Monster Pump. You might need to switch to the other Captain to call the other Pikmin to relieve them of water.

3. Keep the Yellows for the entire time that you're removing the weapons; after removing the Monster Pump, command the Yellows to remove the Flare Cannon when neither fire or poison is being used to attack.

4. Next, have the Yellows remove the Comedy Bomb. However, always attack the bomb when it's not being used, since this, like the Monster Pump, can knock out the captain, despite his immunity to it.

5. Finally, go all out on the Shock Therapist. It is important you remove this last because Yellows are immune to it, so you can have them remove other weapons if this initiates early.

6. If you do not take out the Shock Therapist last, put away the Yellows and get the Pikmin type that is immune to the last weapon

After all weapons have been broken off (it cannot pick them back up), it will lose its armor, but still have Louie on its head. Its skin will turn to a pale yellow color. All you must do now is throw Pikmin at its body. It does not have any counterattacks at this stage other than shaking off Pikmin and deflowering them, but it does have a substantial amount of health. Purple Pikmin are recommended to make this portion faster. When defeated, the Titan Dweevil will seemingly melt into a bubbly, bluish substance, leaving only Louie. The weapons and Louie can be picked up as treasures. Louie's treasure name is the King of Bugs, and he also appears to be holding the monster's antennae. If you decide to fight this beast again, it will be without any armor or weapons (that is, if you did pick up the treasures, otherwise it will still have them). As a bonus, if you defeat this creature when it is petrified, it will drop ten random sprays.

Petrifying the Titan Dweevil while it is using a weapon results in the resetting of the time the Dweevil uses the weapon. You can petrify the boss while it's using the weapon your Pikmin are immune to, allowing you to easily take out the other weapons before it even has a chance to use them again. In theory, the time the creature attacks could be extended indefinitely, assuming infinite sprays were available.

In contrast, the Dweevil can be prevented from using its weapons altogether, simply by quickly walking off the arena and onto the sidelines while the creature is roaring and bobbing its head. It will not use a weapon and instead continue stomping. However, this is extremely time-consuming, and only advisable in zero-death runs, if at all. 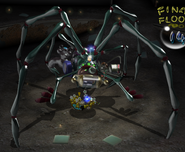 A Titan Dweevil with all of its weapons.

The Titan Dweevil with all of its weapons knocked off.