Toady Bloysters (ツブラメケメクジ) are slug-like creatures found in Pikmin 2 and Pikmin 3. They creep along the ground in search of food, and upon discovering Pikmin, they emit a loud call reminiscent to that of a cow calf, then lash out with 7 adhesive pseudopodia-like tentacles (in Pikmin 2). Any Pikmin hit by the tentacles stick, and are ingested if the Bloyster is not killed before it can finish "chewing." As slow as they may be, a Bloyster is capable of causing a very large drop in the number of Pikmin a Captain has at his/her disposal, should the player be careless enough to allow the Bloyster the chance.

A single Toady Bloyster spawns in the Perplexing Pool, and tends to roam around the shallows near the entrance to the Shower Room. When defeated, it drops one or two randomly colored 10-Pellets in addition to the gill-like organ on its back, which propagates 25 Pikmin at any Onion. Entering any of the caves in the Perplexing Pool will trigger a respawn, making this Bloyster a particularly low-risk method of spawning large amounts of Pikmin in a short amount of time, potentially 45 Pikmin per Bloyster defeated.

In Challenge Mode, a Toady Bloyster holds The Key on the first sublevel in The Giant's Bath.

The Toady Bloyster appears in Pikmin 3. The tentacles have changed from being 7 seperate tentacles to being one tentacle that branches out into 6. Also, rather than shaking Pikmin off, it releases ink in this game which will causes the Pikmin to panic for some seconds, though if the Pikmin are latched on to the Gill-like organ on its back, they will not be harmed. Two Toady Bloysters can be found in the Story, one in the Garden of Hope and one in the Twilight River.

"This species of creature has yet to fully evolve from shelled mollusk to the more advanced bloyster. Compared to the bloyster, this creature is significantly smaller. The fact that its mandibles do not protrude as significantly as the ranging bloyster is due in part to the fact that like most mollusks, its vital organs are located deep within the creature's carapace."

"Pan-sear the herbs and oil until lightly crusted on the outside and rosy on the inside. Complement the savory flavors with a light and buttery creme sauce."

"The rare Toady Bloyster is a smaller water-dwelling version of the Ranging Bloyster. The creature is capable of eating several Pikmin at once, but only if they loiter close to its mouth.Its weak point is the bulb that hangs over it's backside."

"The Toady Bloyster is a large, slow moving aquatic creature. This creature uses retractable tendrils to pull its victims into its mouth. Like the Sputtlefish, the Toady Bloyster releases a cloud of ink when it feels threatened.

When you encounter a Toady Bloyster, flank the creature and use a squad of Blue Pikmin to attack its bulbous tail. While clinging to the tail, your Pikmin should be able to avoid the Toady Bloyster's ink clouds. However, if any of your Pikmin are caught in the attack, use your whistle to calm them down.

The best method of taking down a Toady Bloyster is simple; latch as many Pikmin as possible onto the gill-like organ protruding from its back. If a Captain is feeling bold, they may instead decide to simply barrage the Bloyster in question with Purple Pikmin. Petrifying the Bloyster and following the petrification with a headlong assault works just as effectively as either of the two aforementioned methods, but is only recommended if a Captain's Pikmin count is especially low or if a Captain wishes to minimize any chances for casualties.

In Pikmin 3, the Toady Bloyster can be attacked by throwing Pikmin onto its bare, fleshy back instead of the gill-like protrusion on its back. If the Bloyster releases ink, just whistle the affected Pikmin back to you and continue the assault, and if you don't, they will not die and just become idle. Using an Ultra Spicy Spray proves to be effective as well. Throwing Pikmin at the gill organ, as stated before, will prevent them from being sprayed with ink, allowing just a few pikmin to kill it in seconds. This is a helpful strategy, especially for Mission Mode.

It can be noted that the Toady Bloyster found in at least Silver Lake and Shaded Garden on Battle Enemies mode are significantly weaker than the average one.

Official art of the Toady Bloyster from Pikmin 2. 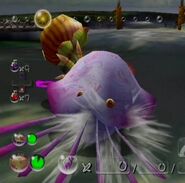 A Toady Bloyster in Pikmin 3.

The fully stretched out tongue of the Toady Bloyster.

Another picture of the Toady Bloyster wandering about.