Unmarked Spectralids (サンショクシジミ) are insects in Pikmin 2. They resemble small butterflies, colored either red, yellow, or purple. They are one of the harmless enemies in the Pikmin series, having absolutely no means of attack. They are located in specific patches of plants and appears upon being disturbed, leaving the area's boundaries not long after. A Spectralid's color indicates what it drops, being either Ultra-spicy Spray (red), Ultra-bitter Spray (purple), or a drop of nectar (yellow).

The only area above ground where they appear in is the Awakening Wood. One group is hidden in a Margaret near the Sunseed Berry, and another in a nearby Figwort (next to the bridge there); red and purple Spectralids do not appear above ground, and can only be found (along with more yellow Spectralids) in "rest sublevels" of certain caves. Usually when underground, Spectralids are found in clusters of twenty or more. These creatures are so delicate that, upon being petrified, they will fall down to the ground and crumble.

"When strolling through the forests of this planet, clouds of these creatures are seen dancing overhead. Like flower petals drifting in the breeze, the sight of flitterbies dancing in the lush green undergrowth is unforgettable. Flitterbie collectors drool over specimen sample boxes lined up in order, highlighting the slight color gradation changes from blue to red to yellow. Such items fetch particularly high prices at auction."

"Spectralids don't provide a lot of meat, but the exquisitely elegant wings are surprisingly tasty, particularly when expertly prepared with a sweet candied glaze."

"The butterflies offer more atmosphere than gameplay challenge. If you have the time, you may toss some Pikmin into a flock of the colorful creatures and collect their bodies for Pikmin sprouts, color-matched nectar or Pokos."

Throw Pikmin rapidly into the air in all directions in an attempt to knock them down, or spray a large group with an Ultra-bitter Spray when with a small number of Pikmin. The latter is only really worth it if red or purple colored Spectralids are present in the swarm, as more sprays will then be gained. 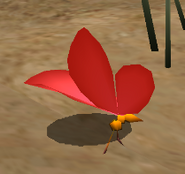 A close up of a red Unmarked Spectralid.

Official Art of Unmarked Spectralids.
Add a photo to this gallery

Retrieved from "https://pikmin.fandom.com/wiki/Unmarked_Spectralid?oldid=128376"
Community content is available under CC-BY-SA unless otherwise noted.