Welcome to my userpage, where I explain nothing about myself, save for this introductory paragraph. At the moment I'm using this as a brain dumping site for ideas which don't fit anywhere else. I'd like to note also that I have not studied biology formally outside of high school, taking most of what I know from books, television, and Wikipedia, so keep in mind that whatever I write is not unlikely to be riddled with inconsistencies and falsehood, and criticism is welcome.

Pikmin being the product of someone's imagination, nothing can be said about them with any real degree of certainty, but much can be inferred from their behavior and what little information is slipped to us from in-game dialogue. Actually, in a way, the lack of real canonical information on creatures into which an enormous amount of thought and detail were obviously put makes studying Pikmin a bit like studying real animals in that nature has no guides or definitions, so it is entirely up to us to make sense of it.

In the absence of fossil or genetic data (I could not expect Nintendo to put that much thought into it), I've constructed a family tree of Pikmin and relatives based on observable differences and information given to us from the game. 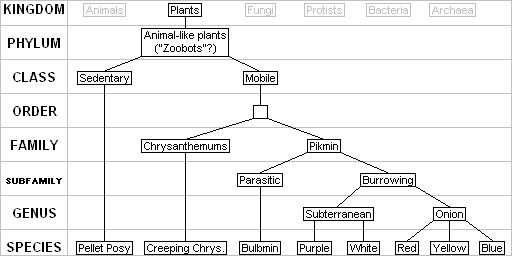 Immediately worthy of note is the fact that I placed everything in the plant kingdom, not animal or some new kingdom, with Pikmin and relatives making up their own phylum. Though Pikmin have some animal-like features and abilities, such as free locomotion, what differentiates animals from plants is often not so much what they have, but what they don't have that plants do, such as chlorophyll photosynthesis (save like one or two species of animal plankton). Whereas evolving such things would require a great leap from animals, things like self-driven movement and sight, if even only in some bare, basic form, are already possessed by more than a handful of plants. Not only that, but certain features such as Pikmin flowers which seem to serve no purpose could be considered throwbacks from a plant origin.

As for the distinction between subterranean "Candypop-only" Pikmin and Onion-dwelling ones, much is just speculation. The absence of White and Purple Onions does not necessarily mean none exist, nor that White and Purple Pikmin are designed to be subterranean, but the fact that both have pink flowers seems to suggest a common ancestor which diverged from the rest of the group some time ago. Despite that, they still share many similarities, and it may turn out with further evidence that they are no less close in relation to Reds, Yellows, and Blues than those Pikmin are to each other.

With the generic separation of the other Pikmin in mind, I felt the need to further separate Bulbmin from the rest of the group, so I created a subfamily for them.

Just like animals, plants need food and oxygen to make energy. Unlike (most) animals, plants are able to make their own food through photosynthesis by using energy from the sun to combine carbon-dioxide and water into sugars, but they still need oxygen in order to get energy their cells can use from those sugars and other nutrients. It's easy to imagine that if a plant had some other way of obtaining nutrients, it might not even need to photosynthesize (though if it didn't it would arguably no longer be considered a plant).

I'm sure Pikmin photosynthesize to some degree, which is probably how they're able to grow flowers when left in the ground, but when they're out working, running, and fighting, I highly doubt that the single tiny leaf atop a Pikmin's head is able to collect near enough energy to support such an active lifestyle. Since Pikmin are never observed to eat anything besides the occasional drop of nectar, I would have to guess that the Onion supplies Pikmin with nutrients from food they have brought it, which it breaks down for them so all that complicated digestive machinery doesn't take up precious space in their tiny, agile bodies. Pikmin probably store the energy in their bodies somehow, like how animals use fat tissue, and are "recharged" by the Onion at the end of the day.

Onions and Candypops, too, probably don't photosynthesize much, if at all, given they have no leaves (or very small leaves in the case of Candypops, which live mostly underground and probably couldn't get enough sunlight to survive even if they wanted to). Chrysanthemums are in the same boat as everything else, but are probably able to do all the hunting, eating, and digesting themselves. As for Pellet Posies...I can only imagine. Their ability to grow so quickly and produce such nutritious pellets without large leaves or some other visible means of obtaining food baffles me. Maybe they extract nutrients from decaying remains of animals underground with the aid of symbiotic fungus. Who knows?

Pikmin are obviously social creatures, similar to bees, ants, and termites, but evolved independently of them. They share much in common, but there's also a lot that's different. Whereas social insects communicate mostly by smell, Pikmin seem to do it by sight and sound; I can't say for sure whether or not Pikmin smell at all, but the fact that they follow Olimar, who could not possibly produce Pikmin pheromones, means its part in their communication must be minimal at best.

The auditory part is pretty easy to see. Pikmin sing all the time, but more than just being cute, I think their songs are vital to keeping themselves together and organized. It also explains why they react so strongly to Olimar's whistle and whatever that little horn thing he does is when the C-stick is used.

The visual part requires a bit more imagination. It's pretty clear that Pikmin can see - they have eyes after all - but it plays a more important and complicated role than just "see food, attack food." Since they don't likely smell very much, I think Pikmin use their sight to identify other members of their species, but their visual acuity and processing power are likely limited by their size, so they need a fast and simple way of doing so, something that is unique to them; I believe the leaves serve this purpose. Evidence for this idea is the fact that Pikmin leaves glow when they are idle, a clear visual signal of something (possibly to call the attention of the pack should a Pikmin become lost or stranded). The color of a Pikmin's body also always contrasts that of its leaf, so it is easily recognizable (White Pikmin have pink flowers, not white, so there is still contrast. It is also because of this that I firmly believe there should never and will never be Green Pikmin, since its body would blend with its leaf, which must be green). If one accepts this idea, it's easy to imagine why a Pikmin might follow Olimar, whose shining antenna probably sparks the same visual cues they get from other Pikmin, but to a much larger degree. It also explains why Pikmin accept juvenile Bulbmin, which probably smell and look just like Bulborbs save for their recognizable leaves, as their own (the adults are just so absurdly huge that they probably don't register as anything but an enemy to Pikmin).

Community content is available under CC-BY-SA unless otherwise noted.