The Vehemoth Phosbat (オオバケカガミ, Ō Bake Kagami) is a boss in Pikmin 3, and is the second boss encountered in story mode. It is a large, bioluminescent moth-like creature with massive orange wings, yellow eyes, small stumpy limbs, and a large gaping whale-like mouth.

This creature resides in dark caves, where it renders itself completely invisible by turning off all of its biolights, which also allows it to safely roam the cave undetected. When a crew member approaches the Vehemoth Phosbat, it lights up its entire body with bioluminescent hairs which glow pink, and an orange torso. Upon lighting up, it will open its mouth and inhale ferociously, creating a powerful vortex that will trap Pikmin and the crew members. After a few seconds, any number of Pikmin up to 5 will be inhaled into its mouth and become the Phosbat's meal.[1] When distressed, it will also frantically flap its wings, releasing a cloud of toxic dust that chokes nearby Pikmin and causes them to scatter around the room.[2]

At the beginning of the game, Charlie takes shelter in a cave, where he finds larval Phosbats crawling on the cave floor. He uses his Yellow Pikmin to kill them, which leads to the parent Phosbat abducting him. He is not playable until Alph and Brittany rescue him later in the game.[3]

"The Vehemoth Phosbat is located in the Distant Tundra. This creature attacks by flying into the air and inhaling its victims. On their own, these attacks are relatively easy to avoid. However, the Vehemoth Phosbat uses a cloaking ability to approach its hapless victims without being detected.

Unlike the Armored Mawdad, the Vehemoth Phosbat's arena is much more expansive, giving the player more room to move about. As the player enters the area, the only light present will be from the variously-placed Common Glowcaps. In this darkness, the Phosbat is invisible, and it will quietly move throughout the area, only revealing itself when it tries to inhale Pikmin. To stun the Phosbat, the player can lure it near a light and then activate it by throwing Yellow Pikmin at the electrode circuits, which will cause the creature to reveal itself and fall to the ground, stunned. However, once the player has lit up two of the lights placed around the cave, the Phosbat will retaliate by summoning its babies to attack the player. Its young can eat 1 Pikmin at a time. However, they're slow, easy to kill, and unable to approach light from either the bulbs or the glow caps, making them pose little threat, but can be somewhat of a nuisance when trying to do other tasks.

The Phosbats are spawned from large eggsack-like objects that are placed throughout the area called Phosbat Pods, which can be destroyed to prevent further spawning of Phosbats. Continue the previously mentioned stun method to buy some time, as the Phosbat will constantly follow you after you've begun to attack its children. You can hide under Glowcaps, which will prevent it from coming towards you, at least until the next phase of the fight. Destroying a Phosbat Pod will drop nectar, which is a good time to flower your Pikmin for the second phase.

Scattered around the cave are 2 piles of Fragments, which can be used to build a bridge to a large red box. Having 20 Yellow Pikmin stand atop this box will light up a large light bulb attached to the cave ceiling, which illuminates the entire area. This light results in the stunning of the Phosbat and renders it incapable of becoming invisible for the remainder of the battle. After this happens, the player can simply throw Yellow Pikmin onto its back to weigh it down whenever the beast stops to suck in Pikmin. After it gets back up, it will begin to release a toxic powder that chokes all nearby Pikmin. During this time, it will retreat onto a wall in the cave to rest and regenerate health. It is recommended to throw several Rock Pikmin at its back while it rests, as normal Pikmin will just be thrown off after the Phosbat prepares to start flying.

Continue this process until the Phosbat is defeated. Upon defeat, the Phosbat will erratically fly around the area until it electrocutes itself on the light bulb dangling from the ceiling, after which it will fall to the ground and writhe in pain, just before its life finally ends.

Warning: it is advised that this strategy is only attempted by experienced players.

A much quicker way to defeat the Phosbats involves using both captains and distracting the boss while the Pikmin work.

First, have the Pikmin destroy a few Phosbat Pods to get them nectar. Then, go to the right of the cave entrance and there will be a pile of sticks that lead up to a fragment pile. Instruct all of your Pikmin to climb the stick and construct the bridge while the captains distract the Phosbat. Once the Pikmin have brought all of their bridge shards to the bridge, it should be long enough for the captains to throw each other across. Simply throw one of the captains across and then throw 20 Yellow Pikmin up to them, and then have them use the Yellows to activate the car battery. This will instantly commence the second phase of the battle.

Once the Phosbat falls to the ground, swarm it with all of your Pikmin, and then quickly call them back before it gets up. Once it begins to fly away, stay ahead of it and throw a few Yellows at it while running in the same direction that it is flying. This will make the boss stop to shake them off and change direction. During this short period of time, quickly throw all of your Yellows at it to weigh it down, causing it to fall into the ground and struggle to get back up, which opens it up to further attack. Using this strategy, the boss can be defeated in under 2 minutes.

After its death, the player unlocks Charlie as a playable character and is rewarded with the Heroine's Tear.

The Vehemoth Phosbat being revealed after the area is lit up. 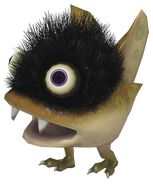 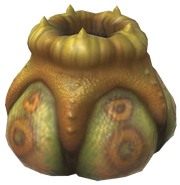 The Vehemoth Phosbat, crashing into the light bulb and dying.