The Volatile Dweevil (サクレショイグモ) is an enemy in Pikmin 2. At first glance, it appears to be Bomb Rock with legs, but are actually Dweevils that have picked up bomb-rocks, much like how other members of the Dweevil family pick up treasures and corpses; unlike other members of that family, Volatile Dweevils are known only to carry bomb-rocks, and are never seen without carrying one.

A Volatile Dweevil's Bomb Rock will start the count-down fuse as soon as the creature is startled, it will chase captains and Pikmin until the bomb explodes, killing itself, and anything else caught in the blast. With that in mind, the best way to deal with a Volatile Dweevil simply to run away from it until it blows up. They cannot be attacked unless petrified, which also freezes the bomb-rock in mid-detonation, making it useful in an emergency but often impractical because it wastes a spray on an enemy which will drop no corpse.

In terms of gameplay, Volatile Dweevils are more-so hazards than enemies. They can unexpectedly drop from the ceiling and are often found around treasures, making them extremely dangerous to Pikmin attempting to retrieve the treasure.

"The volatile dweevil is one member of an insect family known for mimicking objects by carrying them on their backs. The dweevil family exhibits a most unusual characteristic whereby the creature's behavioral patterns actually change based upon the object the creature carries on its back. The volatile dweevil has one of the most potent attacks of all species in within the dweevil family, due to its habit of carrying explosive devices. Approach with caution and/or body armor!"

"This scorching species combusts upon contact with the tongue. Only edible by the adventurous and asbestos-tongued."

"Bomb-rock-carrying spiders charge at your Pikmin and pilots as their explosives are triggered and the countdown has begun. When you see a Volatile Dweevil, gather your Pikmin and run. The good news is that once a Volatiles Dweevil's bomb rock detonates, the creature will be history."

Typically, Volatile Dweevils will fall from the ceiling in certain caves, so always be cautious in those caves. If a Volatile Dweevil drops down, it is best to stay near it long enough to begin its count-down process, and then run away to allow it to explode away from your Pikmin. Dealing with Volatile Dweevils while carrying treasures is a little more difficult, as it makes you call your Pikmin back, often more than once. When carrying objects back to your ship pod, and a Volatile Dweevil falls upon your group, you can lead the Dweevil away from the Pikmin with your captains. Just make sure to get out of the way of the explosion, as it deals a decent chunk of damage to your leaders.

Start up the Piklopedia. Then go to the Volatile Dweevil archive. First petrify it, then wait. Right before it breaks free, petrify it again. If it is done correctly, Bomb Rock should be turned into stone. Throw Pikpik Carrots at it, and if they hit it, it will wake up, but the bomb-rock won't activate. You can do two things with the Dweevil now.

The end result is the same; it will explode, and the typical enemy Spirit will rise up from it. The 'creatures killed' counter will not be affected by this clearly unintended death.

The cause of this bizzare glitch is because the game encases the enemy in stone, seemingly all at once, but actually freezes both at seperate times. The bomb rock is actually frozen first, so the bomb rock will break out of stone a few moments before the actual Dweevil. By timing a bitter spray at the correct moment, you will freeze the bomb rock, but the Dweevil won't be frozen, and will break out of the stone a split-second later. 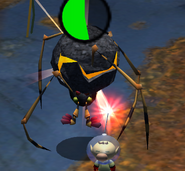 Olimar in front of a Volatile Dweevil. The Dweevil's black head is visible here.

A volatile dweevil in an unused cave.

Volatile Dweevil glitch in Piklopedia, set off by Pikpik carrots
Add a photo to this gallery

Retrieved from "https://pikmin.fandom.com/wiki/Volatile_Dweevil?oldid=128378"
Community content is available under CC-BY-SA unless otherwise noted.