The Waterwraith (アメボウズ, Amebouzu) is a boss from Pikmin 2, found in all of the sub levels of the Submerged Castle and in the Bully Den in Challenge Mode. It can only be defeated by Purple Pikmin; however, the entrance to the cave is flooded, making them impossible to bring along.

Its appearance is generally humanoid in shape, with the suggestion of a head, body, arms and legs, but without distinct characteristics, as it has a watery, transparent body. As a matter of fact, its scientific name is Amphibio sapiens, which is similar to the human's scientific name: Homo sapiens. The Ship notes that although it can be seen, its sensors somehow detect nothing, leading to the conclusion that the Waterwraith's physical form is anchored in another dimension. It is one of the most dangerous enemies, as it can instantly kill Pikmin by just rolling over them, and cannot be deterred or defeated until the final floor. The only good thing is that it does not appear immediately, instead giving the player a five minute grace period before appearing. In the Bully Den, two Waterwraiths will fall when the seconds counter falls to 270, leaving you with only 30 seconds to get settled and prepare. When encountered in the Submerged Castle, but not in the Bully Den, its music will play - music that is played only then.

A sample of the music.

"What is this?!? I can see it with my optical receptors, but my sensors cannot detect it!"

"Could its physical form be anchored in another dimension? ...Attacking it is futile!"

"If only we could force it to take on physical form... But in its current state... Krzzzt-zrrrk!"

"All that is known about this creature stems from a few sightings deep underground. All reported sightings feature the same core set of details: a giant, viscous form with a clear, hazy sheen not unlike hard candy. One theory holds that it may be the ectoplasm incarnation of a kind of psychic phenomenon, but as is usually the case with such theories, it is very difficult to prove. All witnesses report being suddenly overcome with fear upon sighting the creature, approaching a state of panic and near insanity. In fact, every report contains an inordinate amount of extremely vague details, which has led to suspicions that exhaustion and fear have caused some simple natural phenomenon to be viewed as a living creature."

"Inedible. Known to cause mass hysteria, followed by leg spasms and internal thunderings."

"The terified Waterwraith appears before the final floor of the Submerged Castle, but you won't be able to defeat it until you use Violet Candypop Buds to create purple Pikmin on the cave's lowest level. One touch from a purple will make the beast temporalily vulnerable."

Before the boss fight

The Waterwraith will come on any sub level of the Submerged Castle, usually after about 5 minutes. However, before Sublevel 5, there is no way at all to harm it; not even Bomb Rocks will have any effect. With that in mind, there are a few things to remember:

These tips mostly apply only to the Submerged Castle. Items marked with an * can be used in theBully Den as well.

When encountered, the beast falls from the sky, lifts up its front roller, and smashes it on the ground, crushing any Pikmin underneath. It then commences moving around on its stone 'rollers'. It will chase Olimar and any Pikmin nearby with greater focus on crushing the active Captain. It is invincible to any Pikmin assault, even if petrified, except that of the Purple Pikmin. When a Purple lands on or near Waterwraith in a fashion that would stun any other beast, it turns a deep shade of purple not dissimilar to that of Purple Pikmin. In this state, it is vulnerable to all Pikmin attacks. Proceed to swarm the Waterwraith. When the Wraith's health has been fully depleted, the rollers crumble and the Waterwraith (now resembling a bill-less, translucent penguin) will run aimlessly around the cave, no longer a threat to your Pikmin. Attack with more Purples and then you can easily attack it with other Pikmin. When defeated, it will vanish into nothing, and you will be troubled no more. It drops the Professional Noisemaker, a useful addition to the Exploration Kit the first time you beat it in the Submerged Castle.

Strangely, petrifying the Waterwraith makes it less vulnerable to Purple Pikmin, in which case the Pikmin must be thrown in a perfect arch for enough impact to make the creature susceptible to attack. In other words, Purples make a certain "thudding" sound when they hit an enemy or a plant; when this sound is performed, a creature may also be stunned. These effects can only occur when the Purples have a straight fall downward after their throw (the distance in which they fall vertically is irrelevant, as long as it exists). Finally, when all these circumstances are achieved, the Waterwraith may gain damage; this will not happen when Purples are thrown on it without the drop.

Note: In the Submerged Castle, you will only be able to get Purple Pikmin on the final sub level via the Violet Candypop Bud.

In the Bully Den, you will already have 25 Purples, but no other color of Pikmin. Here, there are two Waterwraiths and a variety of other creatures.

The Waterwraith is one of the few enemies in Pikmin 2 which has its own background music, along with the Titan Dweevil and the Giant Breadbug. In Sub levels 1-4, when it appears, its own music track plays. When it has no rollers, a different piece of music plays, which has a more positive mood. The best way to defeat it is to get all of your Pikmin and the 10 Purples that you got from the Violet Candypop Buds.

Throw a Purple on it to make it vulnerable. Now swarm all your Pikmin around the rollers. This should destroy the rollers in about three seconds. Then just finish it off.

While in the Piklopedia, press the "Z" button immediately upon selecting the Waterwraith to petrify its roller. When the Waterwraith itself lands, it too will be encased in stone, but the roller will revert to its normal state before the creature itself. Petrify it again, and the Wraith is normal, but not the rollers; the Wraith will have problems lifting them. Its audio will get messed up, as it cries with each attempt to pick up the front roller. It is possible to do this in the main game (and Challenge Mode) as well, but the beast won't turn purple when Purple Pikmin are thrown at it. This is because it needs to lift its rollers first. You can also make the Waterwraith float if you have AR by doing the one hit code.

When the Waterwraith pulls the rollers up, petrify it. Then when it wears off, do it again. If your timing is correct you should only petrify its rollers. The Waterwraith's arms will be stretched backwards, grabbing the roller that is in mid-air while it sits on the other roller facing the ground, trying to pull back the roller.

It is possible to defeat the Waterwraith while petrified. First, it must be without its rollers, and the player must deplete its health as far as possible. Then, when frozen, if Purple Pikmin are thrown onto it, it should die in that state, shattering and leaving 6-7 pools of nectar and spray of any kind.

Yet another glitch can be performed by knocking it off its rollers, and frantically switching characters, will cause the Waterwraith to appear to "ice skate" instead of sprinting.

It is likely that if the Waterwraith's head comes into contact with the Research Pod after having lost its rollers, another glitch will occur. The outcome is a change in the way it moves: instead of walking, the creature glides along; and any Pikmin that touch it are thrown out-of-the-way, though unharmed. The amount of health it had previous to the glitch occurring determines whether or not it can be damaged in this state.

Another glitch may occur when the Waterwraith attempts to turn around sharp corners. Instead of successfully completing a 360 degrees turn, it may get wedged in the middle of a tight space. This could either be helpful, allowing the player to avoid the Waterwraith, but this glitch could also block crucial pathways, such as a pathway to the next floor. Unfortunately, the only solution for this is to reset.

Yet another glitch happens when the Waterwraith is hit with a Purple Pikmin while running. The Waterwraith may turn clear while in the crouching position, instead of it having a purple hue.

Another possible glitch is known to happen in the Bully Den. The cause of this glitch is unknown, but the effects are strange. When both Waterwraith have had their rollers taken away, they will sometimes only frantically run away from Olimar, and will casually walk past Louie and even stop right in front of him, as if they do not even notice him. They can still be attacked, though. 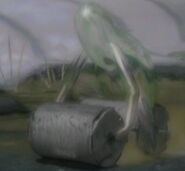