White Pikmin are a troglobitic species of Pikmin introduced in Pikmin 2 and appear in Pikmin 3. They are the third type of Pikmin found in Pikmin 2 and are produced through Ivory Candypop Buds, the first of which are found in the White Flower Garden. Like Purple Pikmin. They are distinguished by their red eyes, pure color, and small stature.

White Pikmin are considerably smaller than all the other types of Pikmin. They have red, possibly compound eyes devoid of pupils that allow them to locate treasures that are completely buried underground, which is demonstrated shortly after discovering them in the White Flower Garden. Due to their small size, they are the fastest of all Pikmin, such that, when flowered, they run at least as quickly as Captains equipped with the Rush Boots. White Pikmin are also extremely toxic, immediately harming and often killing any predator that eats them, although this does not benefit the Pikmin that was eaten as they must have perished to release the poison. Because of they are acclimated to the poison in their bodies, White Pikmin are immune to all outside sources of poison. This allows them to destroy poison pipes and walk through poisonous emissions unharmed. Interestingly, these Pikmin attack and down Pellet Posies faster than either Yellow Pikmin or Blue Pikmin. Each attack does the same amount of damage, but the White Pikmin attack much faster. White Pikmins' extremities are tinged with purple, hinting at the potent poison they contain.

White Pikmin return in Pikmin 3, but only in Mission Mode and Bingo Battle. They are obtained from Ivory Candypop Buds or simply being found and plucked from the ground. They are considerably weaker than they were in Pikmin 2, doing about .75x the amount of damage a Blue or Yellow Pikmin does.Their poison is also considerably weaker, only slightly damaging an enemy if a single White is consumed. They are not found in any areas with poison that they can access, nullifying their previous resistance, and are not able to find hidden treasures. This essentially reduces their usefulness to being able to quickly bringing piles of nuggets to the SPERO.

In the Pikmin Short Movies, a White Pikmin is shown to have the ability to spit poison which can melt metal, although this may have just been added for comedic effect.

White and Purple Pikmin are often considered to be rarer than the other types of Pikmin as they can only be created in limited amounts, unlike the other Pikmin, which can be mass produced as long as there are pellets or enemies on the map. Hundreds of regular Pikmin can be created in a day, but long time consuming expeditions must be made to harvest maybe thirty Whites or Purples.

Although single Ivory Candypop Buds appear fairly consistently throughout the caves of Pikmin 2, the most notable spots are three Candypop Buds found in the White Flower Garden on sublevel 3 when you have 19 or fewer White Pikmin and on sublevel 4 of the Subterranean Complex.

White Pikmin appear in the Super Smash Bros. series as a Pikmin species Olimar is able to pull from the ground via his standard special move, Pikmin Pluck, or one of its variations. They are the weakest and deliver the lowest amount of damage and knockback if Olimar uses them for his aerials and smashes, but when they latch onto an enemy, they deal poison damage, Darkness attributed damage in Brawl, which gives them the highest pummeling power of all the Pikmin. White Pikmin can be thrown the farthest, due to their light weight, despite the actual Pikmin game where Yellow Pikmin are the lightest and are thrown higher rather than farther.

"A type of Pikmin. White Pikmin are resistant to poisons and are themselves toxic to creatures that eat them. Their low weight makes them very speedy, and they can also dig up buried items. White and purple Pikmin do not live inside Onions, so you must change other Pikmin into them by tossing them into Ivory Candypop Buds and Violet Candypop Buds."

Louie, about to throw a White Pikmin.

A clay model of a White Pikmin.

A White Pikmin and a Purple Pikmin carrying a red berry. 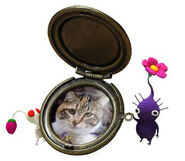 A White and Purple Pikmin carrying the Time Capsule.

A White and Purple Pikmin.

A plushie of a White Pikmin. 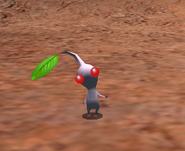 A White Pikmin when first discovered in the White Flower Garden.

A White Pikmin on the expanded version of the Pikmin 3 box art. 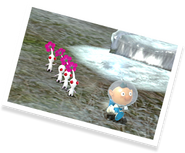 The three stages of the White Pikmin leaf, bud, and flower

A White Pikmin in SSBU
Deutsch
Community content is available under CC-BY-SA unless otherwise noted.
Advertisement