Winged Pikmin are a species of Pikmin discovered in Pikmin 3. Their bodies are a vivid pink color with bee-like markings. They have very large heads, small arms and legs, two large blue compound eyes, which are actually crystalline "goggles", and very small transparent wings. Upon maturing, they sport the lavender Sutera cordat, and have a strong resemblance to White Pikmin They could be known as Pink Pikmin.

As their name implies, Winged Pikmin are capable of flight, and are naturally airborne. They can carry items above the ground and can cut through entire areas to get fruits or spoils back to base quickly. Winged Pikmin are small and fast, allowing them to keep up with the captains at a steady pace. Due to their constant airborne status, they can follow captains even if they're walking in an area inaccessible to most Pikmin types, such as a small pond or other body of water.

Because these Pikmin can fly, they home in on targets when thrown as to not miss. This is extremely useful when battling a highly-mobile creature. However, there are drawbacks to this. Because they fly and home in on their target, they have trouble flattening an enemy (such as a Dwarf Red Bulborb) by landing on its back. The time they need to home in on the enemy can also be liability, especially if the enemy is attacking or if an obstacle needs to be destroyed quickly.

Winged Pikmin seem to be the weakest Pikmin in terms of attack power, dealing only about half as much damage as a normal Pikmin. However, they will produce twice as much damage when attacking airborne enemies, such as Snitchbugs.

Winged Pikmin also almost never touch the ground. Exceptions to this rule are when winged Pikmin hide, fall down (from being shaken off of a large creature), are planted in the ground, help other terrestrial Pikmin carry objects (or carry certain other objects by themselves), while pushing bags or boxes, and while on lily pads.

Because Winged Pikmin carrying are in constant flight, they have unique carrying properties that differ from the other Pikmin types.

When carrying an object, Winged Pikmin will fly with it through the air, making it difficult to call them back with the ground whistle. Instead, they must be called by holding the button, which will summon a cylindrical beam of light that will call the Winged Pikmin or by simply whistling while aiming at the object they are carrying. Winged Pikmin are capable of flying over obstacles and taking aerial shortcuts, saving time that would otherwise be lost if other Pikmin carried the object along the ground. However, this is balanced by their considerably slow flying pace whilst carrying objects. This can cause traffic in groups of Pikmin trying to return spoils to base, as Winged Pikmin slowly carrying an object in the front of the line will cause the rest of the Pikmin to get held up behind them.

Due to this behavior, and combined with the fact that idle Pikmin are prone to assisting nearby Pikmin who are carrying an item, Idle Winged Pikmin are known to "steal" fruits and spoils from other types of Pikmin by unintentionally snatching them away from the other Pikmin as they try to fly with it (even Purple Pikmin).

Winged Pikmin are discovered in the game's fourth area, the Twilight River. Across the landing site, the captains will notice the Pink Onion trapped in the web of an Arachnode on the other side of the river. To get to it, the captains must multitask to construct a bridge out of 4 different piles of fragments scattered across the level. Once the captains finally finish the bridge, they can cross to the other side of the river, kill the Arachnode, and free the Onion.

An image of the Winged Pikmin, photoshopped to have increased brightness and more organized pixels to slightly increase resolution. 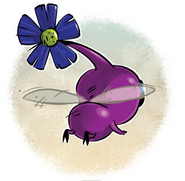 Artwork of a Winged Pikmin for Official Nintendo Magazine. 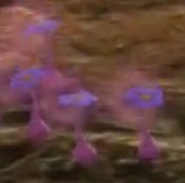 A high quality screenshot of a Winged Pikmin.

The Pink Onion when it is first spotted by the Captains.

Quoted from the Nintendo facebook page: "Check out our Winged Pikmin! Inspired by the new character in Pikmin 3, this flying machine will launch off of the dock at Red Bull's Flugtag event on July 27 in Ottawa-Gatineau"

Winged Pikmin uplifting Olimar in SSB for Wii U and 3DS. 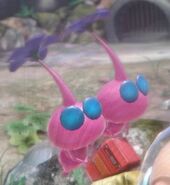