Wistful Wild is the final area that can be accessed in Pikmin 2; it is made available once the Hocotate Freight company's debt has been fully repaid. It is one of the most dangerous areas, containing enemies like a Gatling Groink and Orange Bulborbs. It contains five treasures above the surface which total 3205 Pokos, and three caverns for a total value of 13295 Pokos (13285 in the PAL version of the game). The design of this area is a combination of The Impact Site and The Final Trial from Pikmin. It is also a representation of autumn. Contents of the region include two large lakes, one of which can be drained and the other bridged; a clearing with three randomly-colored Burgeoning Spiderworts; and rusted metal structures, tree stumps and Foxtails. As with all areas, different variations of music play while breaking down a gate, building a bridge, or approaching an enemy. 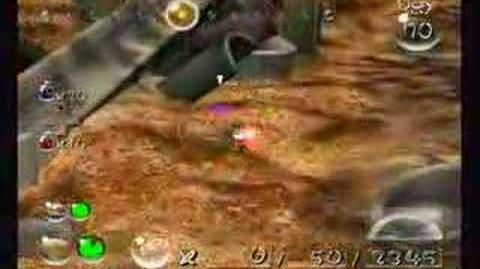 An overhead view of the area

The yield sign that is at the start of the area.

The Japanese Stop Sign in the PAL version of the game.

A bamboo forest in the Western side of the Wistful Wild