The Yellow Wollywog (イモガエル) (known as Yellow Wollyhops in the PAL versions of New Play Control!) is a frog-like creature found in all three Pikmin games. They are large, round, yellow creatures with large eyes and beady pupils, and short front legs with larger hind legs. Their skin is tinted green towards the top of their heads, with green spots along the sides. In Pikmin 3, their appearance is very polished, with moist skin and their green patch and spots much more pronounced. They can usually be found around large, open-air bodies of water. When Pikmin come near, they attack by leaping and stopping in midair, then falling on to the Pikmin to crush them. Their behavior is explained as an attempt to drive predators away from developing eggs. In Pikmin 3, their attack is much more realistic looking. In the first two games, the creatures hung in the air with nothing to hold them there, whereas, in Pikmin 3, they inflate their throat sacs after leaping, giving them a few seconds of air before falling down. They are the only mature species of Amphituber in Pikmin 3.

"There is a troublesome creature by the water. It immediately tries to jump on and squish the Pikmin, so if I don't quickly issue commands, the Pikmin get flattened. If they could use their strength to hold the beast down, could it still jump?"

"After evolution led to the development of its specialized jumping ability, this amphibian actually lost much of its ability to swim."

"This magnificent specimen has the brightest gold coloration and the greatest number of lateral spots of any member in the amphituber family. This species seems to have lost some swimming proficiency with the evolutionary adaptation that granted it greater jumping ability. The amphituber inhabits aquatic shallows and shows an instinctive drive to jump upon and squash smaller creatures."

"Beer-batter and deep-fry for a down-home flavor you won't soon forget!"

"Almost always found in the water, the Yellow Wollywog is more vicious than it looks. Toss blues at the beast and be ready to call your troops to your pilot if they are thrown off. The reward for capturing an above-ground Yellow Wollywog is eight Pikmin."

"The Yellow Wollywog is a frog-like amphibious creature. This enemy attacks by leaping into the air and crushing its victims. Rock Pikmin cannot be damaged by this attack, making them a good option when facing one of these creatures. Because Yellow Wollywogs tend to stick close to water, Blue Pikmin are often your safest alternative.

When you're leading a more diverse squad, toss Red Pikmin or Blue Pikmin onto a Yellow Wollywog to weigh the creature down, then throw your Rock Pikmin at the enemy to deal heavy damage."

"If you don't disturb this creature, it will leave you alone as well. Once bothered, it uses its powerful jumps to attack. I can sympathize. I've known people in my own life who lash out whenever anybody tries to wake them up."

"A frog-like creature from the Pikmin series with a strangely egg-shaped body. Though its legs are short and stubby, it is nevertheless capable of gigantic leaps, which prove deadly to any unfortunate Pikmin that happen to be nearby when it lands. Despite typically being found near water, it's not much of a swimmer."

These dangerous enemies must be dealt with carefully, as one false step could mean the loss of dozens of Pikmin with a single attack. Swarm with as many Pikmin as are on-hand and they should be able to weigh the Wollywog down to the point where it can't jump; as their health dwindles, Wollywogs can often summon the energy to make a last-ditch leap into the air, so be prepared to call the Pikmin back when its health meter enters the red zone. Any Pikmin hanging onto the Wollywog when it lands will be thrown off and possibly deflowered from the force of the impact, sometimes spelling doom for non-blue Pikmin if they are knocked into a nearby pool. Beware that Wollywogs have no limiter on how many pikmin they can kill in one jump. This only applies to this game.

Yellow Wollywogs are much harder to ground in Pikmin 2, even if numerous Pikmin are thrown onto its back, but swarming can still be an effective strategy, as the radius within which the Wollywog can crush a Pikmin is substantially smaller than in the first game. Purple Pikmin will also work exceedingly well when thrown at this beast in large numbers, as each one carries the chance of stunning it, preventing it from fighting back. Be careful though: if the Wollywog jumps while you are throwing, the Pikmin land under the Wollywog, putting them in massive danger. Players should stop throwing just in time for the Wollywog to jump, and continuing the attack when it lands. Even so, often the safety strategy is simply to punch it with captains, especially if the Rocket Fist upgrade is available. This is better suited in dungeons, where there is no time limit. Note that if its health is completely depleted while in the air, it falls to ground earlier than usual, crushing any Pikmin below it.

Yellow Wollywogs only have one method of attacking, and that is by crushing Pikmin. Rock Pikmin are unable to die through this, so it is efficient to use Rock Pikmin against Wollywogs. If you can't use Rock Pikmin, toss your other Pikmin on top of the beast. When it hops up, quickly call back all of your Pikmin. Eventually, it will be defeated.

In this game, Yellow Wollywogs also have realistic crushing physics, which allows them to damage and kill enemies they land on, aside from captains and the Pikmin.

It can be noted that the two Yellow Wollywogs in Fortress of Festivity on Battle Enemies mode in Mission mode are significantly weaker than the average one, and it seems like a leader or Pikmin must get closer to them than normal to make them attack.

Yellow Wollywogs are first encountered in Sector 5-C; Downpour Thicket. They can be defeated by throwing your Pikmin on top of them and letting them whittle away at their health. If it shakes them off, whistle for your Pikmin and wait for the Wollywog to jump, then run under it while it hovers in the air. Then you can finish it off.

In the Final Trial in Challenge Mode, there is a Yellow Wollywog near a pipe. If the Yellow Wollywog jumps on the hole in the pipe, it gets stuck there; it can be coerced into doing so by moving Olimar onto it. While stuck, the Wollywog cannot be harmed; it remains in its jumping animation and cannot be brought out of it.

There is more than one glitch with Yellow Wollywogs. If you kill the Yellow Wollywog in the path that the bridge will be built in Challenge Mode, and you build the bridge over it, the Wollywog's body will start "twitching" and fall through the ground. Another minute later, it will reappear beside the bridge.

Yet another possible glitch that can occur in the Shower Room in Pikmin 2 is when the Wollywog gets stuck in the ground and cannot be killed. 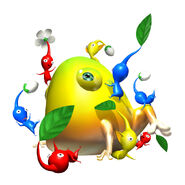 The Yellow Wollywog as seen in the Creature Montage of Pikmin. 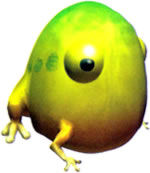 Artwork of the Yellow Wollywog from Pikmin 2. 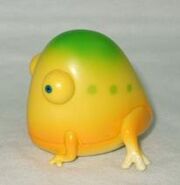 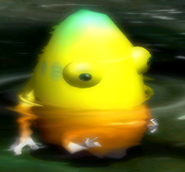 Two Yellow Wollywogs in Pikmin 3 near Alph and some Winged Pikmin.

A Yellow Wollywog attacking some Rock Pikmin. Another sits in the water.

A Yellow Wollywog as seen in Pikmin 3. This photo was taken using the Gamepad.

A Yellow Wollywog cleaning itself.

A Yellow Wollywog jumping on a Yellow Pikmin.

A Yellow Wollywog as it appears in the Creature Log.

A cutscene where a Yellow Wollywog frightens two Blue Pikmin.

Blue Pikmin attacking a Yellow Wollywog in Hey! Pikmin.
Add a photo to this gallery

Retrieved from "https://pikmin.fandom.com/wiki/Yellow_Wollywog?oldid=131871"
Community content is available under CC-BY-SA unless otherwise noted.